The winner will submit the pictures of the largest number of bird species taken on the territory of Kyrgyzstan during this year.

* number inside brackets means the number of species photographed in 2020

all species photographed in 2020

The first photo registration of a Black-Bellied Sandgrouse on birds.kg.

Rare record and first photo-record of Snow Pigeon in Kyrgyzstan. Most recent records of Snow Pigeon are related to summer of 1985, when E.D.Shukurov during 5 days found 4 Pigeons in mountains of Alai ridge, and 3 ones in north slope of Chonalai ridge. Birds were observed in altitude 3000-3330 m. Nest with eggs was found by E.D.Shukurov at June 14, 1985 in canyon of northern slope of Chonalai ridge in altitude 3200 m. In Zaalai ridge S.V.Kulagin observed Snow Pigeon several years ago in Ichke Suu, close to Lenin Peak area, but he couldn't take photo of bird.
more rarities... 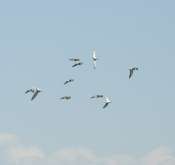